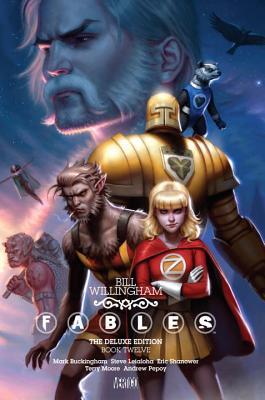 Fabletown is gearing up for one last stand against the Dark Man. Pinocchio is assembling a team of the strongest Fables and, in what is seen as a hare-brained scheme by many other Fables, giving them costumes and superhero names reminiscent of those found in the comic books he loves to read. Meanwhile, at the Fortress of the North Wind, a motion to choose a new North Wind is underway. The North Wind has gone missing, leaving Bigby, Snow, and their children confused and hurt. The other Cardinal Winds move in, hoping to choose a child who’ll serve their own ends. The children think it’s obvious who the new king will be, but who ends up being chosen surprises all of them. Will the child step up to the challenge? Will Bigby and Snow be able to do what all parents must do at some point – let go?

What I like about this series is that nothing goes the way you expect it to – this volume was no exception. They could have titled this volume “Fables: Plot Twist Central”! I loved the arc about Pinocchio and his superhero scheme. This series isn’t afraid to poke fun at classic comic book tropes, and the end result is always hilarious. The cubs, thus far, have been more of a side story, and it’s fun to finally see them get more of the spotlight. Not much has gone on in Fabletown as far as “the next generation” goes, and it only adds a new element of intrigue to the story. I can’t wait to see where the story of the kids especially goes from here!