I had been anticipating this new series for over a year, but with several production delays, it did not premiere until September 2017. I eagerly watched the first three episodes and felt it was intriguing, although I had some major issues with the feel of it considering it is a prequel to TOS. I basically was having a hard time with a suspension of disbelief that all the changes fit in with the established canon. I then took an extended break from the show, as I was in my last semester of grad school and had to concentrate on my portfolio and final projects. It wasn’t until after Christmas that I binge-watched all the episodes I had missed. 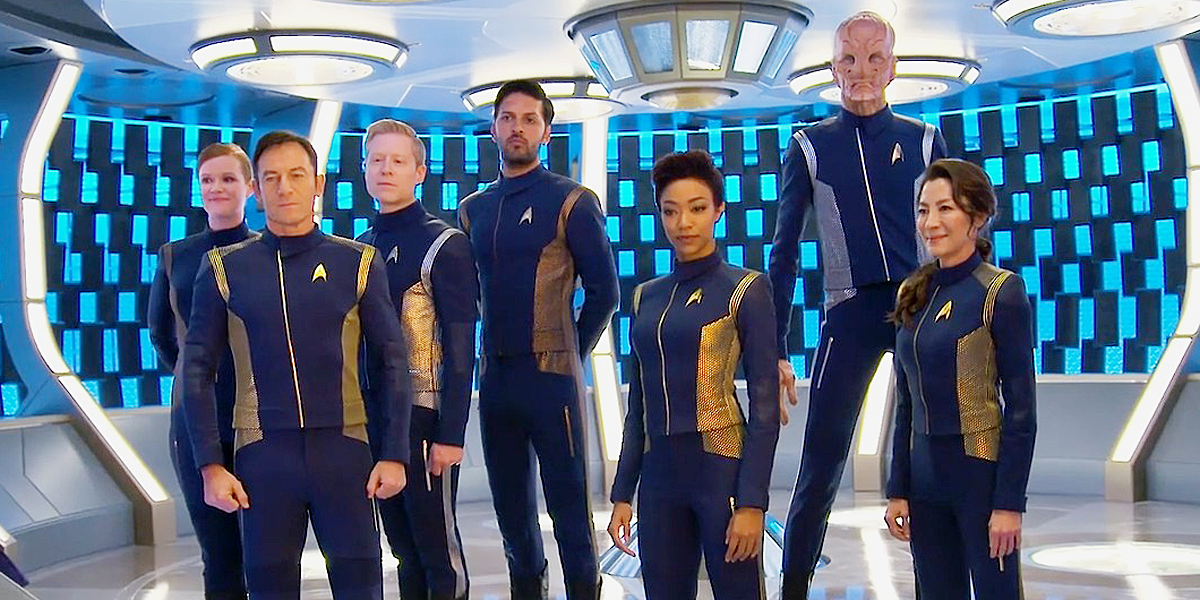 Discovery also changed up the pacing of the series with a prequel to a prequel in the first few episodes, with the series first starting on the U.S.S. Shenzhou and for its lead character not being a captain. The odd pacing also included what seemed to be a season-ending arc concluding a few episodes shy of the finale, with the last two episodes taking a sudden u-turn that seemed to aim toward storylines that might align with TOS.

I think what has tipped the scales for me is the characters. I like the diverse crew. Michael Burnham is an appealing lead, whom I predict will eventually become a captain and be the one that will be included in captain montages with the other Star Trek series leads.  Commander Saru is a unique alien that has captained ably, but I worry that his quiet fortitude will be overshadowed by more dramatic staff. Crusty Lt. Stamets and his husband Dr. Culber are a perfect example of showing a loving relationship and Ash Tyler showed male vulnerability (before his huge secret was revealed). Sure, I liked Captains Lorca and Georgiou, but it is the regular crew that has elevated the show for me.

And Tilly- I shall devote a whole paragraph to her! I love her! She is me! She is sweet, and can often be overlooked or not taken seriously because of her kindness. She is curvy and has wild curly hair plus a parent that she never could please. But she is also extremely competent and has a steely resolve that takes some people by surprise due to her being underestimated. When her Mirror Universe counterpart was Captain Killy (she was badass there!) I was thrilled. More Tilly, please!

When I saw the picture below- I teared up in happiness. Included are additional bridge members (the two on the left and the three in the back row on the right) who haven’t had much development yet, but have so much potential! The picture makes me hopeful that the episodes won’t always concentrate on the leads, and that lesser-known ship crew can get their due. They deserve a #DiscoParty!

Was the series perfect? Hell no! I have come to think of it as not quite Star Trek, for it is a grittier and less idealistic show than I have come to expect. Instead, it is a sci-fi adventure show that pays lip service to the series, and I suspend logic (Spock!) for the sake of enjoyment. It is quite rare for me to do, but my tendency to make mountains out of molehills would only do me a disservice and I would miss out on this flawed but interesting new series.