Voices in the Dark 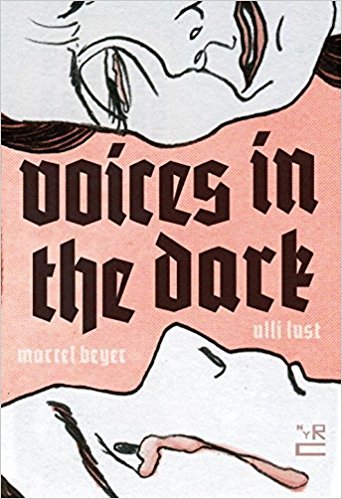 Hermann Karnau is a sound engineer for the Third Reich. It’s his job to set up the microphones for speeches. He also has an unquenchable obsession with recording all sounds imaginable. Sounds of human origin, of natural origin, of machine origin – he wants to record it all, and is blind to most everything else. He keeps records of these sounds in his apartment, dissects animal heads to study the auditory organs and places in the brain, and takes a portable tape recorder to the front lines to record the sounds of war. His work also takes him into the home of Joseph Goebbels, where he meets an unexpected friend. Helga is the oldest daughter: vivacious, curious, and just beginning to wake up to the world around her… both beautiful and terrible. Will their friendship be a bright spot in an increasingly dark world, or will the darkness swallow it as well?

I have to confess this one was too disturbing for me to finish. I usually avoid reading material set in WWII, but wanted to try pushing my boundaries a bit as per my 2018 reading resolutions. However, I did get about halfway through before skipping to the end, which I’m counting as a win. Hopefully I finish the next one I try!

This graphic novel is based on a novel of the same name by Marcel Beyer, and you can tell by the format. It’s a lot more text-heavy than your usual graphic novel. A lot of that has to do too, I think, with the fact that it deals so heavily with sound. Onomatopoeia abound: from the sighs and huffs of people in conversation to pitter patter of rain and chirping of birds to the staccato reports of gunfire, there is hardly a panel without a sound in it. Many graphic novels have such indications of sound, but it’s so absolutely central to the story here that sound itself becomes a character.

The art is very good. The figures are stylized, almost childlike. It appears to be drawn and colored in marker. The colors are mostly muted grays, but color is used in sequences of Helga’s childhood, Hermann’s epiphanies, and in tense moments. Usually one color is used by itself – for example, one sequence may be all in pink, with values indicated in lighter or darker shades of the same pink. Two or more colors are used sparingly, but to great effect as it befits the story.

The story itself is chilling. It starts out with Hermann being quite impersonal and detached to all around him but his work. At the end, it’s clear he’s changed. There are changes within Helga and her family, as well. Both their stories show the spectrum of apathy to awakening within trying times. A haunting read for those who can stomach it.

2 thoughts on “Voices in the Dark”