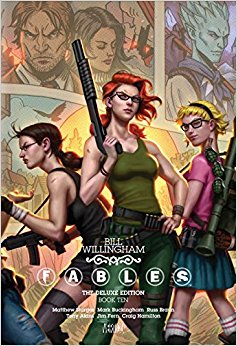 It comes to the attention of Snow and Bigby that there is a villain out there who has the power to wipe away the entire universe – and rewrite it as he sees fit! The source of their information, is of course, unreliable… it’s Jack we’re talking about, after all. But for once, he isn’t playing around. He’s got backup to prove it too. They call themselves the Literals, and they are the embodiment of the literary devices. Kevin Thorn, the embodiment of storytelling, is the one causing trouble. The Fables, the Literals, and the Page sisters (the three embodiments of library sciences) have to find a way to stop him before he erases them all out of existence! Meanwhile, Jack makes his way back to the Farm. He has some unfinished business with Rose Red, and someone has some unfinished business with Jack himself…

This arc is called “The Great Fables Crossover” because it crosses over with Jack’s spin-off comic. This one didn’t do much for me. Mostly, I was confused on the characters outside of Fabletown. The Literals are many, and they weren’t well-introduced. They finally gave a cast of characters spread in part 8 – of 9. By that time I was almost through and didn’t bother going back to see who had said what or done what. Besides, just like Nancy said in her review of Jack of the Fables, Jack really is a huge jerk!

The next arc contained in this book, “Werewolves of the Heartland” was back to just Fables: a story about Bigby and an old friend from his WWII days. The art was really cool in this one! It looked almost like woodcutting or hatching. A good, spooky read for a cold and cloudy day ;D