Lately I have been on a Stephen King and Joe Hill kick, and Goodreads noticed. Recently I read The Cape and and on the “readers also enjoyed” sidebar Road Rage was recommended.  I was able to track down a copy and was pleased to see that the book included two short stories- the first written by the father and son duo of King and Hill, but also included an adaptation of the classic story Duel by Richard Matheson. 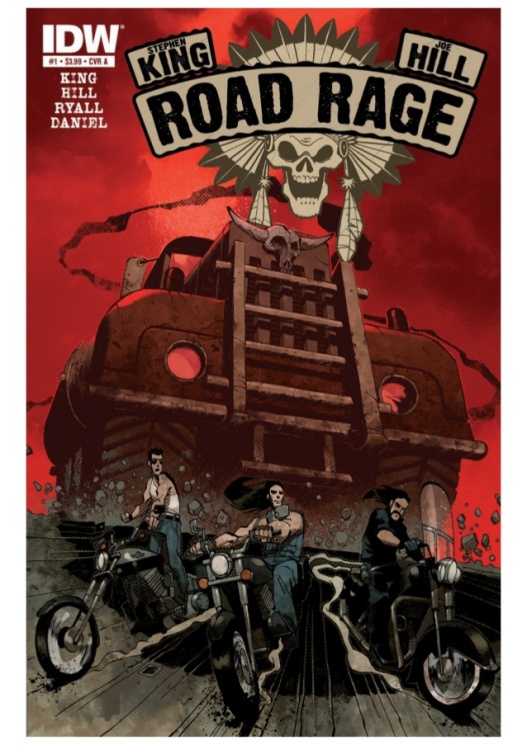 With an introduction by Stephen King, the reader is given a homage to Richard Matheson, for this first story was originally included in He is Legend, a book collection of Matheson-inspired stories. King gives Matheson partial credit for shaping him into the writer he is today.

We are introduced to a group of ten bikers, that have a Sons of Anarchy vibe, although they are called The Tribe. The three main characters are leader Vinny, Lemmy, and Vinny’s son Race, with the other bikers getting less face time. At a truck stop they are discussing a drug deal gone wrong, that resulted in a death, and their plans to try to recoup their losses. The leaders speculate that one of the truckers might have overheard their conversation , but figures “No one with any sense would want to get involved in their shitpull”. They were wrong. Out on the road the trucker comes after them, and blood and mayhem endue. You will just have to read the story to find out the trucker’s motives, and the resulting causality count.

The story is illustrated by Nelson Daniel who did the art in The Cape, also written by Hill. I enjoy his work, and liked his computer generated dot matrix that he uses for shading. He was able to make each biker unique looking, and had some great layout designs in his panels.

This story included a second introduction, this time by Joe Hill, and he recounts some fond childhood memories of road trips with his father. As a child he had been fascinated with the movie Duel, directed by Steven Spielberg, and he and his father had fun in the car imagining what they would do under the same circumstances.

The premise is simple, a traveling salesperson is on a deadline, and wants to pass a trucker on a desert stretch of highway. He does so, but the trucker is incensed and starts to play cat and mouse games with the hapless driver. The driver pulls over at a truckstop, knowing he will now be late for the meeting, but as he fears for his safety, he wants to let the menacing trucker go by. Unfortunately for him the trucker also stops as to continue their driving duel. To find out who wins the duel you must read this book and/or watch the movie! In fact, the movie is my Friday night plans, as I was too scared by it in my younger years to watch it to completion.

The art is reminiscent of the famous painting The Scream by artist Edvard Munch, with the swirling lines and emotion of fear coming through the work. Colored with a muddy palette the browns, yellows and oranges aptly depict the barren landscape. At first I was not a fan of the illustrations, and was turned off by the impreciseness of how the driver looked. But his seemingly melted face conveyed his terror as his day went to hell in a blink of an eye.

I would definitely give this book a recommendation, but it will come as no surprise to King and Hill fans, the book is for mature audiences as it has quite a bit of violence with some graphic illustrations.