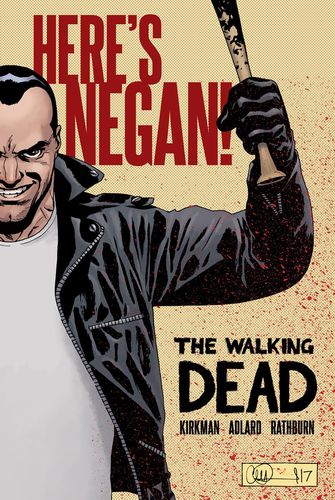 The Walking Dead’s favorite psychopath now has a backstory! This slim volume shows us Negan before the zombie apocalypse and in the days following, and we learn what shaped him into the charismatic villain that we love to hate.

When I bought the book it was shrink-wrapped in plastic, so a casual shopper couldn’t flip through it and find out more about Negan without actually purchasing the book. The book is much shorter than I would have expected, and was a quick read.

The book begins a few months before the world goes to hell, and we meet Negan who is a foul mouthed gym teacher who has a nasty quip for everything. He seems to respect his wife Lucille, until we see him cheating on her, despite her recent cancer diagnosis. Negan has a parallel with Rick, as the zombie’s attack while he and his wife are in the hospital. I do not want to share anymore than that, because the point of the book is to show Negan’s journey from being a regular asshole kind of guy to the monster we know him as.

But I will say- I was highly disappointed in this story. It’s hard to share why without giving away too many plot points, but Negan’s arc wasn’t as complete as it should have been.  There was more character development of Dwight and Sherry and the the group that will evolve into The Saviors, than with Negan. Plus, there seems to be a discrepancy between this book and a conversation he and Rick have in Volume 28.

I also had been intrigued that Negan seems to have an aversion to rape, although certainly not killing, and I was curious if they would address some of his contradictions. While they dance around the subject, it wasn’t truly answered. So I ended up feeling the plastic wrap was to prevent shoppers from backing out of the purchase once they discovered this book doesn’t quite pass muster. Some of the ingredients for a good narrative were there, but they were not fleshed out enough. Borrow, do not buy this book (that’s what libraries are for!) to get your Negan fix.