Top 5 Wednesday is a weekly meme from Goodreads. This month’s T5W topics center around Halloween, and when asked to pick my favorite type of scary creature, I knew zombies was it!

Revival is a favorite of mine, and I have written a lot of posts about it. In this now completed series, twenty three people inexplicably come back to life in rural small town Wisconsin. The “Revivers” are not your typical zombies looking for braaaiins. Instead they quietly rejoin their former lives, not even realizing or remembering their deaths. Their new existence sets the town on edge, with media scrutiny, a government quarantine and religious fanatics taking over the region. The series is being developed into a movie through Shatterglass Films. 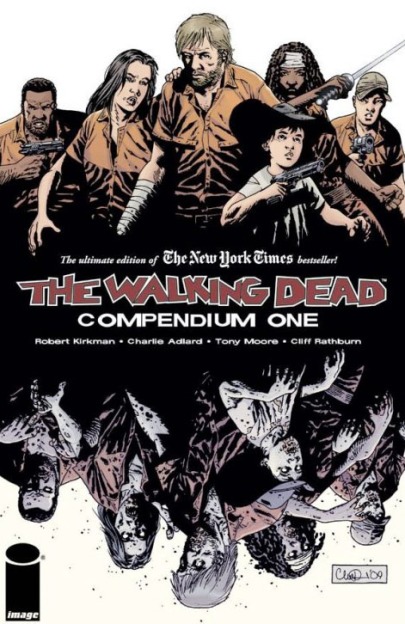 The Walking Dead is the grand-daddy of all zombie series.  A fascinating premise, that is getting a bit long in the tooth now, but is still beloved by many. I list the three compendiums I have reviewed on my blog, but I have also been keeping up with the smaller volumes as they come out, and putting reviews up on my Goodreads account (edit- I added in the fourth!)

This book must be listened to on audio…it was beyond good. The story covers the history of the world wide war against zombies, and the narrative covers a reporter getting first hand accounts from survivors that tell about the beginning of the epidemic, the resistance, and the aftermath of the zombie catastrophe.  Some of the standout characters/stories were Todd Wainio, the Redker Plan, the North Korea speculation, the female Russian soldier, the pilot of the downed plane, and the family at the Manitoba campsite. A tiny criticism, is that I figured out every supposed surprise in the stories, and the connections between the world-wide characters strained credibility. The actors voicing the characters in the audio edition were perfect- Mark Hamill! Nathan Fillon! Denise Crosby! Jeri Ryan! Common! Alan Alda! I will definitely be listening to this story again and again.

Negan has been a prominent villain in the long running The Walking Dead series, and is a perverse mix of monster and savior. The question of how he became so twisted and his backstory during the zombie apocalypse is explained in this book that just came out the same week of Volume 28.

After is a strong collection of nineteen short stories about life “after” a catastrophic event. As with any compilation with various authors, some are stronger than others. One of the standouts was  After the Cure by Carrie Ryan. It  took the zombie story trope and subverted it. Vail is a teenager that was previously a zombie like creature but was given a cure to rehabilitate her. Society has a hard time accepting those rehabilitated people back into their communities, and the people themselves still feel some degree of hunger and a need to be back with their undead packs. Despite the melancholic nature of this story, there was a nugget of hope built into the end.

Who would have thought that zombies could be so appealing, but my reading list doesn’t lie!