I discovered Wild C.A.T.S. in the .25¢ bins at a local comic con, and I am enthralled by this time capsule of the early 1990’s and reading about the growing pains of brand new (at that time) Image Comics.

This series was one of the first published by Image and was created by Jim Lee and Brandon Choi, with further pencils by Lee. Originally envisioned as a three parter, it was expanded to four. It established a new super hero group, with the moniker Covert Action Teams. This team concerned themselves with the battle between aliens called  Kherubim and Daemonites.  The team was a motley group pf heroes, with not a great deal of backstory to explain their origins. When Vice President Dan Quayle is overtaken by the evil Daemonites (OMG- how awesome is that!), so the group works together to avoid world chaos. Image’s flagship superhero group Youngblood shows up too, not understanding that Quayle has been possessed and is not truly himself. This was the first combining of Image universes, showing that the two teams coexist together. While there’s more to the story obviously, a recap is hard to explain. This story must be experienced to appreciate it. You can also have fun matching up these heroes with who you think they would correspond with in the Marvel or DC universes.

Now let’s talk about the art! Lee is a talented artist, but God, the excesses of his drawing made me laugh. The issues came out in 1992-93, right during that time frame that the superhero genre was at it’s most superlative. Women especially were drawn so amazingly out of proportion to be comical, and unfortunately that continued to be the case with this series. At times the art overpowered the already somewhat confusing story, with an myriad array of panels. There were a few times you had to flip the story sideways to follow the panels, one time just so they could show a full length view of the hyper-sexualized Voodoo. A nitpick I had with the covers of the first four issues is that the art always covered some of the words. I found that odd and not very appealing. For the compendium cover, they fixed that problem. 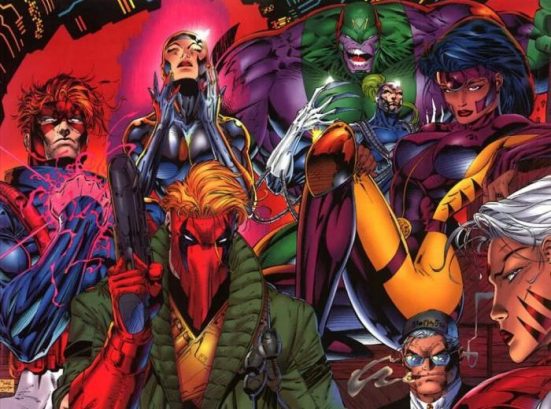 Jim Lee started each issue with a letter to the readers, which I found fascinating, for it gave a window into what was going on behind the scenes at the company. I watched the DVD documentary about the founding of Image Comics, The Image Revolution, so I was already privy to the rough start of a now strong comic publisher (BTW, I wrote that review very early on in my blogging career, and it hardly received any love. Read it now to understand more about Image’s rocky start & like the review!!). Lee was brutally honest in his letters in acknowledging that Image had a big problem with timeliness in getting their issues out. He also is kind enough to explain why Whilce Portacio, the first of the seven founders to leave Image, was MIA due to a family death. This went far in reinforcing my thought that the documentary didn’t explain enough what happened to Portacio.

I came away from this series smiling. While I might have criticized some aspects of the storytelling, this was a fun read. Image Comics remains a favorite of mine, so I enjoyed going back in time to read some of their first stories.