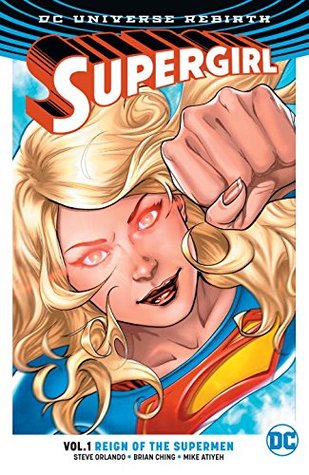 Supergirl’s certainly got her work cut out for her. She needs to get Cameron Chase, the formidable director of the D.E.O., to trust her, her foster parents to hone their Kryptonian, and pass her driving test. Like a normal teenager. Which she certainly isn’t! On Krypton, Kara was top of her class, but at her new science academy on Earth, she has trouble operating a projector. She feels clumsy, frustrated – and homesick most of all. She flees to the Fortress of Solitude and wishes she could be closer to Krypton. Be careful what you wish for, though… or a Cyborg Superman claiming to be your father will just show up and offer to show you Argo City, just as he’s restored it back to life. It’s impossible – isn’t it?

I didn’t read New 52 Supergirl, so I went in completely blind. In the first issue especially there were vague references to past events that left me lost. These petered out, and it did get marginally better, but… honestly, it felt as if the whole book was a rewrite of the first season of the show if Kara was a teenager instead of a young adult. I wanted to like it a lot more than I actually did. The art was super cool, and lively, which kept it moving along at a quick pace. The tension between Kara and Cyborg Superman, and the question of whether or not he really is her father, was very well-done and disturbing as we learn what lengths he will go to take Kara back for Argo City.

The redeeming factor: A NON-SKIMPY COSTUME!!! She wears a long skirt and thigh-high boots, which are much more practical for fighting crime.

(Even her costume is almost a carbon copy of the show’s costume, but I’m so happy it’s not stupidly impractical I’m letting it slide)

Has anyone read further than me? Should I keep going? I keep being so disappointed by Rebirth I’m not sure if I want to continue this one =(

4 thoughts on “Supergirl (Rebirth, Vol. 1): Reign of the Cyborg Supermen”