The first volume of The Wicked + The Divine: The Faust Act, was an intriguing book with fantastic art but a confusing story. It captured my interest enough to give the next two volumes a go, although I was apprehensive.  It turns out for good reason.

In the first volume, we met eight of the twelve gods, while two are referred to but not seen, and the other two are mysteries. In this volume Laura meets two more known gods, Inanna and Dionysus, and again she is privy to the behind the scenes chaos of the Pantheon as she still tries to investigate Lucifer’s death. The reporter from the first volume, and two of her camera crew, are transformed into the Three Norns, completing the empty spot in the circle of the Gods. This devastates Laura who had hoped that she would be the last chosen.

We learn a bit more about the 90 year cycle of recurrence from Ananke, the God’s ancient guide. A tiny bit of backstory is given to explain why the Gods cycle through the ages, but in truth, it was more perplexing than enlightening. And we also learn that she is the not the benevolent leader she wants everyone to believe she is.

Artist McKelvie is obviously a fan of maps and charts, along with numbered sequences. His 1,2,3,4’s got a bit overused. You’ll know what I’m talking about when you see them.

The volume certainly ended with a bang…

This volume gives guest illustrators a chance to interpret the Gods. I was not a fan of this, as one of the only reasons I have stuck with this series is because I love the art. Although Gillen was still penning all the stories, some didn’t coalesce for me.

One story stood out, and it was basically a stand alone. We finally meet Tara, the most beautiful of all the Gods, and her story is a perfect example of all that is wrong with social media.  People love to build up and then tear down people who don’t fit their preconceived notions of what that should be, and this scrutiny tore at Tara, as she already had issues of this sort when she was still a human. I wish there was more to Tara’s story- as it was one of the best chapters in the story thus far, and I feel the abrupt ending was not justified. This story was Issue #13 when released in comics, and was illustrated by Tula Lotay, an amazing artist.

We also get back stories on Gods Morrigan and Baphomet, the underworld couple with an unhealthy dynamic. It broke my heart to see how Morrigan, both as a human and a God, excused Baphomet’s behavior in the name of love. I have been blessed to have a stable no-drama relationship, so I just don’t get women who let their significant other abuse them emotionally. Baphomet was undeserving of all the second chances he was given.

The other stories didn’t push the narrative far, with some Gods getting a lion’s share of the attention, while others remain an enigma.

So three volumes in, and I am still on the fence about the series. My library owned the first volume, and I recently ordered the next four. That leaves volume four and five taunting me. Should I read them? (Months later, I did! Volume 4 +5) 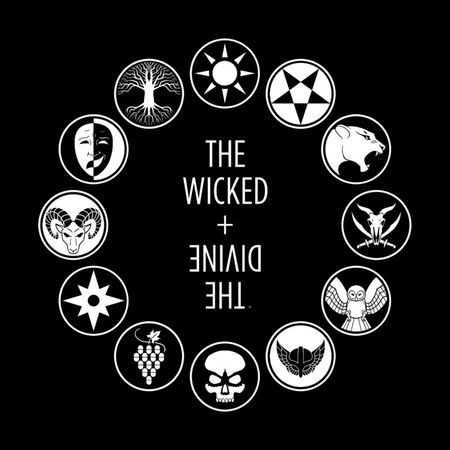 6 thoughts on “The Wicked + The Divine: Volumes Two + Three”