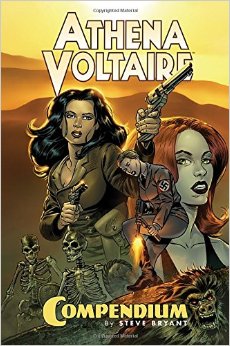 I discovered this one while ordering books for one of my libraries. Have I mentioned lately how much I love being a librarian??? 8D XD

Meet Athena Voltaire: a beautiful aviatrix with a penchant for whiskey and bourbon and not taking anyone’s crap. She’s the daughter of a magician and was once in an air circus – and a land one! She’s put herself out for hire as a pilot, and she gets some pretty strange jobs. The Nazis are gathering ancient and mythical artifacts of great power that they can use to win the war. Athena somehow ends up in the middle of foiling their plans. Join Athena and her friends for all the non-stop supernatural Nazi butt-kicking you could ask for!

The comic recalled Indiana Jones as I was reading it, but you get a really cool heroine instead of Harrison Ford… and it never gets weird like Kingdom of the Crystal Skull did. This is a fun read that doesn’t take itself too seriously. There’s non-stop action, no romantic subplot AT ALL (!!!!!!!! I’M STILL YELLING ABOUT IT), dynamic art, and great characters. Athena herself is witty, resourceful, talented, and remains skeptical about supernatural powers and beings despite all she’s seen. One of my favorite parts was how many places of the world she visits: Hong Kong, Tibet, South America, and much more. Awesome heroine kicking Nazi, vampire, and zombie butt with non-stop action and ABSOLUTELY NO romance? What more could you ask for in a comic??? Highly recommended ❤

One thought on “Athena Voltaire Compendium”