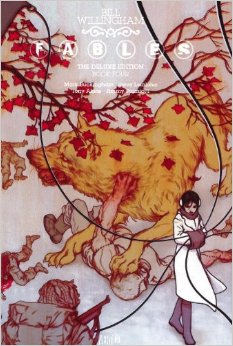 This volume felt quite a bit thicker than the last few! XD There was lots of good stuff jam-packed in here~

First, we get a look at Bigby’s involvement in World War II. The Dog Company is sent on a special mission: Operation Chambermaid, that was so secret it was never put on record. They are dropped somewhere in Germany, where meet their contact, Bigby Wolf, who guides them to their target: a castle where the Germans are performing secret experiments to create monsters.

Back in the present day, Snow gives birth to not just one, but six healthy babies. Unfortunately, due to their hybrid human/wolf appearance, Snow will have to move to the Farm to raise them – and Bigby isn’t allowed there. The first election Fabletown has had for centuries has been decided – Prince Charming is the new mayor, and he has a lot of promises to keep. Snow and Bigby hand off their jobs to Beauty and Beast, but after that… Snow goes to the Farm, Bigby runs off, and Fabletown gets a lot more interesting under their new management.

What follows is the 1001 Nights of Snowfall arc, in which Snow White arrives at the Sultan’s palace in a far corner of the Mundy world as an emissary. The Sultan will not see her, though when he finally does, he explains why. He marries a different girl each night, only to kill her the next morning. As soon as Snow stepped into his chamber, she became his next bride – and victim. The only way she will live to see the dawn is to distract him, and she chooses to tell him a story from the Homelands. And another, and another, every night, until he changes his mind and lets her go.

The 1001 Nights was my favorite arc by far. I’m a sucker for Middle Eastern folklore and fairy tales. It is also written in equal parts like a book and graphic novel. The parts where Snow and the Sultan meet are written like a book, with illustrations throughout, and Snow’s stories are told in graphic novel format. The stories vary in subject matter and in artist, and again, the art is beautifully suited for each story. There’s a lot in this volume for all kinds of readers and that will delight fans.