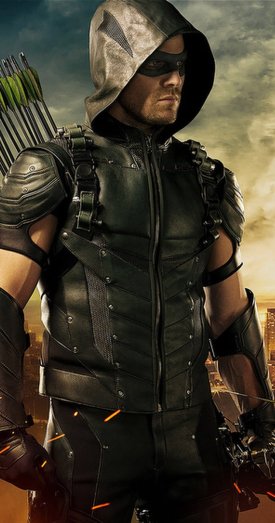 Let me start off by saying that this might be the first and last season of Arrow I ever review on this blog. I knew going in what was going to happen, and that the fandom backlash on this season was pretty rough. But I went in optimistic anyway, deciding to give this show one more shot. By the end of it, I’m done. I am just done.

I get ranty. I get angry. I only hope it doesn’t scare you guys off.

Oliver and Felicity are happy. Like, actually happy. They have moved to the suburbs and have started a life together that doesn’t involve getting shot at, kidnapped, chased by cars, or anything remotely vigilante-like. On the night that Oliver is about to propose to Felicity, Thea and Laurel show up on their doorstep. A gang they call “the Ghosts” are terrorizing Star City (renamed after Ray Palmer, apparently dead in the explosion at Palmer Tech months before), and they are almost powerless to stop them. They persuade Oliver and Felicity to come back to Star City and help them fight the Ghosts.

John is not happy about it. He has lost his trust for Oliver after he kidnapped his wife when Oliver went undercover for the League of Assassins. He reluctantly agrees that they need help, and their investigations begin.

They discover that a man called Damien Darhk is controlling the Ghosts and, later, H.I.V.E. He is a former member of the League of Assassins, and his knowledge of magic makes him incredibly deadly. Oliver realizes that he needs to fight Darhk in a different way than he was before. Everyone thinks the Arrow is dead, so he needs to create a new identity… the Green Arrow. He hopes this, in conjunction with his decision to run for mayor, will rejuvenate the city and give it light and hope once more.

Even as Oliver decides to fight in the light, shadows follow Team Arrow everywhere. John discovers his brother, Andy, is alive. Detective Lance is working with Darhk. Thea is struggling with the effects of the Lazarus Pit. Laurel, seeing first-hand what Thea is going through, decides to put Sara in the pit. And the whole time, Damien Darhk is one step ahead of them, fighting with powers beyond their understanding. How can they possibly defeat him?

It was because of Laurel.

Laurel has always gotten the short end of the stick on this show, especially in the fandom. She spent the entire show up until this season being outright ridiculed by the fandom. But let me tell you something.

When the Gambit went down and Oliver went missing, she not only lost her boyfriend, she lost Sara, and discovered that Oliver was cheating on her with her own sister. Her family broke after Sara’s disappearance. Her mother left and her father became an alcoholic. She had to not only hold herself together, but her father, too. When she is just starting to feel normal again, and even found Tommy, Oliver comes back, and it seems like a miracle. (Albeit a very confusing miracle, but a miracle nonetheless.)

But she still continues to suffer loss after loss. Tommy, of course, died at the end of season 1. Sara came back, only for Laurel to lose her again.

And you know what? That makes her angry. That makes her sad. That makes her turn to drugs because the pain inside is just too much for her to handle, and she’d do anything to dull it. She is ALLOWED to have those feelings. After all that, I’d say she’s ENTITLED to those feelings. I’m not endorsing her drug use by any stretch of the imagination. I am saying I understand and empathize with her, something not a lot of the fandom did (including my friends who also watch it).

She got better. She got clean. She decided to train in boxing and martial arts to work off that anger, but she discovered she wanted something more. She wanted to be like her sister, to become a vigilante and help people, just like Sara did.

She goes to Oliver and asks to join his team. He refuses.

Laurel does not give up. She has to fight for every inch Oliver gives her. And eventually he sees what she’s truly made of and lets her in, even trusting her enough to leave her and John in charge at the end of the last season when he leaves with Felicity.

She was incredible this season. It made me so happy to see her in all her glory: kicking ass, using the Canary Cry, becoming a sister and a mentor to both Thea and John, and looking damn beautiful doing it. We even got to see a little bit of her at her day job (which we haven’t seen in a long while), poised to become ADA. Here is what a woman superhero looks like. Here is the woman superhero we deserve. I was so excited and happy and proud that she was FINALLY getting the treatment she deserved.

And then Darhk stabbed her between the ribs and all of that went down the drain.

I did NOT watch 3 seasons of Laurel being constantly at war with herself and her demons, finally overcome them, and start to come into her own as a hero, only to get killed. What’s worse, it was only after her death that Oliver finally realized that he has to defeat Darhk, and that he didn’t even do it the way he intended when this season started. He killed Darhk in the end.

Pardon my French, but that is some serious Women in Refrigerators bullsh*t. Her death served no purpose other than to get Oliver moving on defeating Darhk, to “see the light,” so to speak. And when he defeated him, he reverted back to his old ways, insulting Laurel’s memory.

I am angry. I feel cheated. I was so looking forward to having Laurel become a more central character in the show as the Black Canary. I felt like, among my friends who watch it, I was the only one rooting for her at times. I was constantly defending her, and my patience and faith was rewarded. I was so proud of her this season, and just when I got to see her in action, it was taken away.

That is why I am done with this show. I am growing incredibly tired of representation of women in mainstream comic media. Laurel was written beautifully: she went through hell, but ultimately survived and became not only her own hero, but a hero to her friends and to the city she served. She felt human. The (very male) fandom constantly ridiculed her for having these very human feelings and going through this very human arc. She grew so much only to be killed for no reason other than to serve as a motivating factor of the male protagonist.

TLDR: This season was good up until the last quarter, I am done with this show forever, and Laurel Dinah Lance, AKA the Black Canary, deserved nothing less than her own show with Speedy.