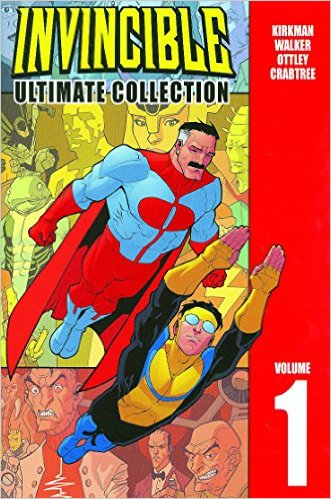 How did I not know of this comic’s existence???!! I found it by complete accident, for no one told me about it, and I haven’t seen it reviewed by other bloggers recently. It is written by Robert Kirkman, and is still being published concurrently with his The Walking Dead series. Just my luck that as soon as I discover this awesome first volume, there was recently an announcement that the series will be wrapped up in the next year.

We first meet Mark Grayson, a young superhero, who is annoyed at having to save the world from doom. The storyline continues with a flashback to four months prior, when he discovers that his powers have finally kicked in. He knew he was destined to have powers, as he is the son of Nolan, aka Omni-Man, the most powerful and beloved superhero on Earth. He and his mom Debbie have always known of Nolan’s alien origins, but the public is unaware of his alter ego. The story continues with Mark adjusting to his new found powers, and how he balances becoming the new hero Invincible with school, fighting villains, pairing up with other young heroes in a team,  and girl issues. Later his world is turned upside down, with a twist that will surprise you, and his life changes forever with this new knowledge. This new development is a game changer and sets up endless stories for the future.

The artwork is fun, fresh and bold. There are lots of little details that made me laugh, especially the homage to the Justice League and to Star Trek TNG, and Mark’s love for Science Dog.  I even thought the font they used for the big sound effects with the interlocking double oo’s added to the whole feel. The mustache on Omni-Man was appealing (TMI- I am a sucker for mustaches. I look forward to November when my husband grows a mustache for the charity Movember) and it was amusing to see mustaches on all the men when he reminisced about his home planet.

I read the Ultimate Edition, and it had a lot of extras in the back. One feature that I found fascinating, was the behind the scenes scripts between Kirkman and Walker. Kirkman had the dialogue and layout planned with details such as how many panels should be on a page, sound effects, setting details such as the Grayson’s home layout, and facial expressions he wanted used. Also included were mock ups of the pages, possible publicity, character studies, and side notes by the creators.

This was an outstanding start to a series that has now been running for years. I’m glad I caught onto this sleeper hit before it comes to a close. Bravo to the team that created a whole world as rich as the DC and Marvel superhero universes. I will be back for more! 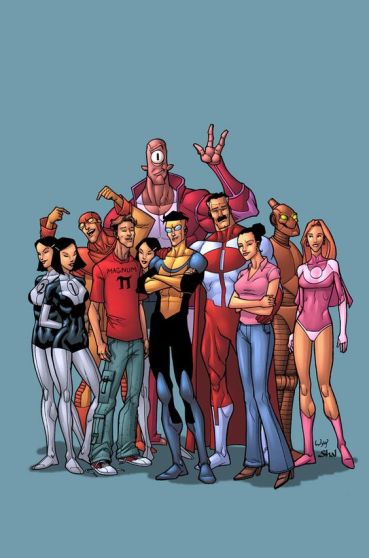 13 thoughts on “Invincible: Volume One”