When IGN declared this story “One of the greatest comic book stories of all time” they were not far off the mark.

After I read Red Son and enjoyed it so much, this book was recommended to me by the manager at Graham Crackers, and he was spot on- I loved this book. The moralistic debate storyline and the artwork are top-notch, and holds up 20 years after first being published. The Eisner Awards that were given to Alex Ross were well deserved.

Set in the near future, the iconic superheroes have retired, giving rise to a new type of “hero,” some of whom are children of the original heroes, many of whom are selfish and are out only for themselves. They do not care for the destruction that occurs when they fight among themselves (Marvel’s Civil War seems to borrow from this plot point in the beginning of their book) as they are lacking personal responsibility.  We are introduced to Norman McCay, a pastor who is the story’s POV narrator and is shepherded around by The Spectre, The Agent of God’s Wrath. The two are privy to events, as an impending apocalyptic event looms.

Superman is in seclusion, after the death of his wife Lois Lane, but Wonder Woman visits him to ask that he reenter society to help ward off further catastrophic events, after a huge swath of America is ruined after two warring superhumans fight. The two reform the Justice League, with many heroes such as The Green Lantern, The Flash, Power Woman, and Red Robin joining them in solidarity. Superman approaches Batman, but is angrily rejected by him. Many other of the superhumans refuse to join with Superman so he reluctantly sends them to prison, nicknamed The Gulag, to reeducate them. Although the Justice League tries their best to help the world, their methods are not entirely successful and suspicions and resentment build in different factions.

Lex Luthor and his evil cohorts band together to form the Mankind Liberation Front, in which humans would regain control, just for Lex to control them in turn. Batman aligns with this group, along with a motley group of second-generation superhumans. Lex’s secret weapon, Captain Marvel, comes out of hiding with his alter ego, Billy Batson, completely brainwashed by Lex. The group stirs dissent in the public, and when disaster looms in the too full Gulag, the true intentions of Batman come to light.

Wonder Woman, who has been pushing for a more militant stance due to her Amazonian heritage, leads the Justice League to the prison to quell the riot. As the rioters emerge, an epic battle ensues. Captain Marvel appears and seems to be outfighting Superman. Can Superman appeal to him, and what will happen among the fighting factions?

The relationships between The Holy Trinity of the DC heroes- Superman, Wonder Woman and Batman- are perfect. Although I have not seen the newest Batman Vs. Superman movie, I am aware that there was criticism about how the guiding principals of the two heroes were changed.  This book stays true to each character’s back story, so kudos to Mark Waid for his familiarity with the history of all the superheroes!  As such, the Epilogue was a perfect ending. After my frustration with how clueless Superman was in Red Son about Wonder Woman, I thought this book ended the story in a wonderful way. The three heroes will remain united.

The artwork is photorealism in style and painted in gouache. This opaque watercolor dries to a matte finish so combining the painting, drawing and other graphic media such as Photoshop produced a unique look. I thought throughout the book that some of the heroes and public looked so realistic that models must have been used, and in the Apocrypha section, my suspicions were confirmed, with a list of who the artist based his drawing off, with the bystander, Norman McCay based off Ross’s own father. The heroes were all aged realistically, and not caricatures of themselves; the greying, lines and weight added was naturalistic. The layout was fun, with splash pages and varied spread panels utilized. Ross’s original idea for this story and his artistry are what made this novel superb.

I so needed a cheat sheet to help me with the many, many characters. As I am not typically a DC fan, I was not familiar with many of the supporting, second-generation superheroes. This Wikipedia page helped me sort out everybody and how they were connected to one another. Sometimes clues in the panels helped me figure out connections, but for example, this site cleared up some confusion to me in regards to three family relationships of Batman. An added bonus in identification was at the end of the book there were several pages that identified every character with a picture and a brief description.

Final asides: When this graphic novel was published, Shazam was still called Captain Marvel, but due to there being a Captain Marvel in the Marvel universe this hero is now known only as Shazam to avoid misunderstandings and lawsuits, with the name officially changing in the New 52 run. I felt the meeting between Orion and Superman didn’t fit in with the narrative (it was not included in the first issue). If Diana is ageless why did her fellow Amazonian sister Donna Troy age? Speaking of Donna, loved the pic of her and Diana reuniting on page 77. In fact I thought Diana looked like Lynda Carter in that panel and Green Lantern/Jade looked like Linda Hamilton of Terminator fame. I shipped on Green Arrow and Black Canary, now mature with a daughter. I’m sure I’ll think up more things, and type in a few edits later 😉

I feel I have not done justice to this book, it demands a second & third read through with more time spent examining the pictures. I am very glad I dipped into DC books with this & Red Son! 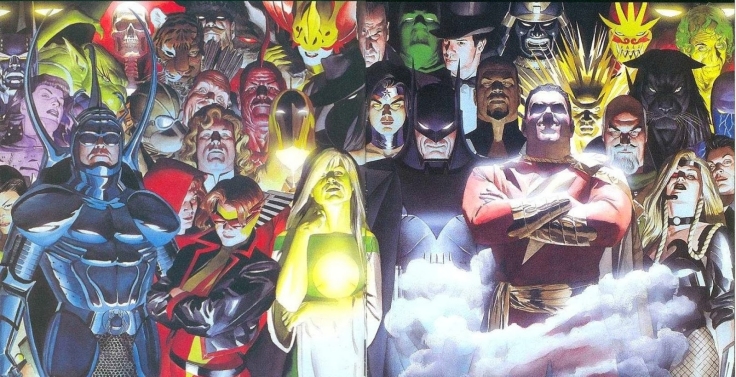