Back in 2001 when the first of the six comics came out, I thought Wolverine’s origin story would finally be revealed. I eagerly awaited each issue, anxious for the truth. As with any good origin story, some questions were answered, but many more were added.

We are first introduced to Rose, a twelve year old orphan who is being brought up the Howlett estate to be a companion for the younger sickly James Howlett in the early 1900’s.  We meet James’s father John and his grandfather, who are very unlike in temperament, with the older gentleman having made a fortune in copper ore in the Canadian mines. His mother, Elizabeth,  is but a ghost in the mansion, shutting herself away after the death of her older son. Rose witnesses long slash marks across her back, and is sworn to secrecy about these scars.

Rose and James strike up a tenuous friendship with Dog Logan, the son of Thomas Logan, the drunken groundskeeper who lives on the outskirts of the estate. Thomas looks strikingly like what we know the adult Wolverine looks like, and his brutality towards his son, starts to turn Dog into a cruel boy. Eventually the friendship dissolves when the class differences become too wide and Dog tries to assault Rose and kills James’s dog.

This prompts the Logan family to be kicked off the estate, with Thomas vowing revenge against the Howlett’s. Thomas sneaks up to take Elizabeth, confirming the hints of a relationship between the two.  John comes in to save her, but Thomas kills him; with James, Rose and Dog witnessing the murder. James flies into a rage, with his claws emerging for the first time, and kills Thomas. His mother becomes unhinged screaming that this has happened before, and cradles Thomas in grief instead of her dead husband John. Rose and James escape, with Elizabeth then shooting herself, leaving Dog the only one left alive at the scene.

The grandfather rejects his surviving grandson sending him and Rose away and covering up the crime. The two eventually leave Alberta and travel to British Columbia and join a logging camp where they hope for some anonymity. Rose becomes a clerk in the office, while James grows physically as he gains strength as a logger, eventually earning the nickname Wolverine for his dogged persistence at the job. They masquerade as cousins and James takes on the name Logan, and the years go by.

Rose keeps a diary of what has happened, as Logan refuses to remember or talk about the tragedy. She and the kind foreman Smitty eventually fall in love, and plan to marry and leave the camp. Rose worries about Logan, as he disappears into the woods for long periods, and worries about how he would cope without her stabilizing influence. As expected he does not take the news well, as he himself loves Rose. What happens next sets up the stage for the mysterious and continued tragic backstory of the Wolverine we know today.

This artwork in this story conveyed the darkness and foreboding of the family estate and later the rugged landscape of the logging camp and nearby wilderness. The panels were bordered by black, continuing the ominous color scheme. I did find the characters inconsistently drawn though, for the combination of pencil drawing and digital painting could take away from the precision that faces sometimes need. I particularly thought Elizabeth and Rose could veer between a realistic rendering, and a grotesque caricature of their normally beautiful faces.

Questions remain: Was Thomas Logan the father of James and his older brother? Are James and Dog brothers then? What exactly happened to the older brother?  Why did both brothers have this power? What more did the grandfather know? Who was Dog’s mother? Is Dog Sabretooth?  What happens to James/Logan/Wolverine in the intervening years after leaving the logging camp? Perhaps some of these questions are answered in Origin II (which I have not read yet) but I doubt it. Wolverine remains special for he is an enigma and his background remains murky. Kudos to the team who wrote this story for it just whetted our appetite for more. 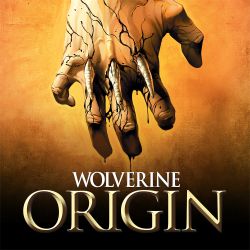 One thought on “Origin”