This book was quite an acid trip. Based off KC Green’s webcomic, Gunshow, his 59 strips about a petulant gravedigger with mommy issues has been turned into this unique novel, with an added epilogue bonus.

The gravedigger (no name given) has inherited the family business of you guessed it-gravedigging. He keeps his beloved mother’s bones in a box near his bed so he can converse with her, much to the dismay of his father’s angry ghost. His father steals the bones, sending the gravedigger on a quest to retrieve them from the Underworld. So begins a journey that has him meet a wise mole, train bandits who want to hijack their way to Heaven, a town of worms that live off the rot of the corpses he buries, Charon the river Styx conductor, and the creature Beelzebub who desperately wants to go back to Hell. How do all these expletive spewing characters relate to his odyssey? Well…let’s just say it’s the journey not the destination for the gravedigger to find closure with his father.

Green’s art style is primitive at best with a simple color scheme. The cover has a different art style than the story inside. The gravedigger’s eyes aren’t big enough and it looks like he is wearing lipstick on the cover, and is rather off putting, but as none of Green’s art is appealing in a traditional way, I guess it doesn’t really matter. (Edit- a commenter clued me in that the cover is like the game Fester’s Quest and this website confirmed it) The style of art and storytelling is reminiscent of the tv cartoon show Chowder, with Charon reminding me of this awesome clip from the series!

So if you have a warped sense of humor, like to swear and are familiar with Gunshow then this book is for you! 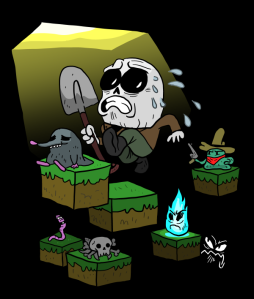